Despite the war, ‘the Ukrainian muses are not silent.’ 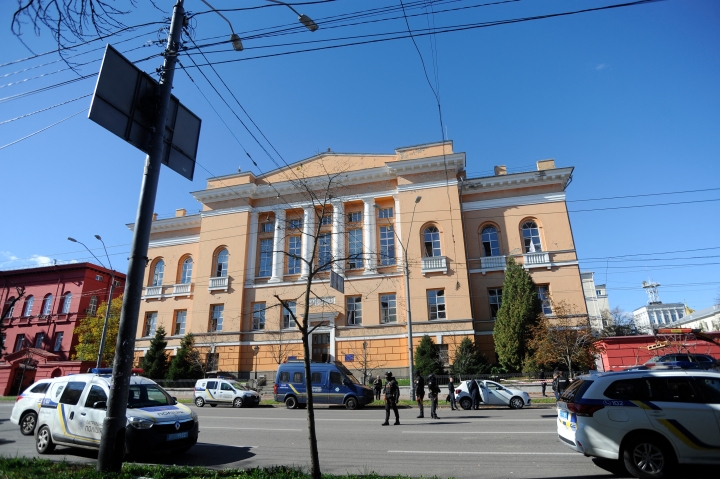 Veronika Yadukha was vacationing with her family in the Carpathian Mountains on Feb. 24 when she was awakened by an early morning call from a friend in Kyiv, telling her the Russians had started bombing Ukraine.

Soon after, the small wooden house Yadukha was staying in began to shake, rocked by vibrations from shelling at an airport 60 miles away.

“I was terrified because we were in the mountains, which was supposed to be a safe place,” says Yadukha, an art curator and translator. At that moment, she realized no place in Ukraine would be safe “until the end, until our victory.”

Instead of returning home to Kyiv, Yadukha and her 4-year-old son took refuge in a bomb shelter in western Ukraine. “I couldn’t think about anything except my kid and his safety,” she says.

Lada Kolomiyets, a leading scholar of translation in Ukraine, hadn’t wanted to leave her home in Kyiv. But in late February, at her husband’s urging, she agreed. Her husband accompanied Kolomiyets and their then-12-year-old twin sons to western Ukraine. Later, she and the boys crossed on foot into Hungary, where they spent a week at a shelter.

“It was very strange for me because I’m a professor, and the very thought of being a refugee made me feel like I was losing my mind,” says Kolomiyets, a professor in the Department of Theory and Practice of Translation From English at Taras Shevchenko National University of Kyiv, and chair of that department from 2010 to 2017.

Eventually, both women accepted a friend’s offer of a place to stay—Yadukha in Germany, Kolomiyets in Sweden. In the coming months, each made her way to Dartmouth, where Kolomiyets is a Harris Visiting Professor in the Comparative Literature program and Yadukha is pursuing a master’s degree in comparative literature. And, even as they adjust to life thousands of miles from home, they are continuing their efforts to protect and promote an understanding of Ukrainian culture.

Kolomiyets and Yadukha are among a handful of Ukrainian scholars who recently came to Dartmouth, in some cases under extended application deadlines, due to the war, says Associate Professor of German Studies Yuliya Komska.

It’s very important to use all the opportunities we have to speak about Ukraine, Ukrainian culture, and the arts abroad.

Also, several new scholarships and fellowships have been created to provide support for Ukrainian academics.

The scholars’ presence here adds an important dimension to discussions about the region, says Komska, who, alongside Assistant Professor of Russian Ainsley Morse and Associate Professor of Russian Victoria Somoff, worked with Director of the Leslie Center for the Humanities Rebecca Biron, Dean of the Guarini School of Graduate and Advanced Studies Jon Kull ’88, Chair of the Master of Arts in Liberal Studies Program Donald Pease, Director of the Harris German Distinguished Visiting Professorship Program Viktor Witkowski, and others to ease the way for some of the academics to come to Dartmouth.

Between their efforts and related work across campus, they have been able to build the largest Ukrainian academic community in the state of New Hampshire, Komska says. Often, Ukraine is seen solely through the lens of various conflicts, says Komska, who is also chair of the Comparative Literature Program. One way to shift that is to bring in people who “can speak to Ukraine as a country and culture that’s vital and vibrant.”

Last week, Kolomiyets spoke as part of Voices of Ukraine, an eight-part virtual series showcasing Ukrainian writers and scholars. The events, which continue through February, were organized by staff and faculty in the Department of Russian, the Comparative Literature Program, and the Leslie Center for the Humanities, which is also sponsoring the series. The research fellows for the series are Daryna Gladun and Karina Madzari, both Guarini ’27. The upcoming speakers include Leslie Center Fellow Hanna Leliv.

Komska says several professors and administrators have asked her to connect them with Ukrainian scholars to speak in their classes, and she hopes more requests will follow.

And, as the students and faculty settle in, “random offers of help and home-cooked meals” would be greatly appreciated, she says. “I think the bigger the support network, the merrier.”

This fall, Kolomiyets is teaching “Topics in the History of Translation and Censorship: Ukraine in Western European National Contexts” in the Department of Russian and the Comparative Literature Program. The course focuses on the country “not only in war, but beyond the war,” and explores the “bright and dark” aspects of translation, she says.

Translation can serve nation-building efforts, strengthening a country’s language and culture, and many writers and translators dedicate their lives to that purpose, says Kolomiyets, who is also a literary scholar. On the other hand, she notes, translation also can be a vehicle for “vicious censorship.”

During her time in Sweden, friends and colleagues sent Kolomiyets announcements about a variety of grants, scholarships, and teaching opportunities.

She applied to three institutions and was accepted at each, leaving her with a difficult decision, Kolomiyets says. Coming to Dartmouth “was a very good choice, because I like teaching, and I found here motivated, interested students.”

Dartmouth’s small community of Ukrainian students and their supporters have been active on campus since the invasion, organizing a rally to protest the invasion, public talks, and fundraisers to aid Ukrainian refugees and provide first aid kits and other medical supplies to the front lines. In May, the newly formed Ukrainian Student Association created a heartbreaking installation on the Green, with toys memorializing the children killed in the Russian invasion.

This term, Kolomiyets plans to start a club that would translate contemporary Ukrainian literature into English, prioritizing work produced in the past six months.

“It is very important to show English speakers that the arts are not silent in Ukraine,” she says. In fact, since Feb. 24, the arts have been enriched “with very high-quality texts.”

The club’s motto? “The Ukrainian muses are not silent.”

Importantly, Kolomiyets says, women’s voices—including the poets Halyna Kruk, Natalka Marynchak, Inna Horbach, Svitlana Didukh-Romanenko, and many others—have been “particularly powerful in these months of existential warfare,” and she considers it significant to bring their messages to an English-speaking audience.

‘The Ability to Be Who We Are’

Yadukha is a member of VERBatsiya, a collaborative translation group that has a long history of translating Beat Generation poetry into Ukrainian. She specializes in intersemiotic translation, which involves transposing one type of artwork into another. Veronika Yadukha, Guarini ’23, shown at work in the Dartmouth ceramics studio last month, is an art curator and specializes in intersemiotic translation, which involves transposing one type of artwork into another. (Photo by Katie Lenhart)

As part of her studies in comparative literature, she will translate poet Richard Brautigan’s book All Watched Over by Machines of Loving Grace into a series of ceramic tea bowls. The bowls—a nod to the influence of Zen Buddhism on the poet—will reflect the poetry’s meaning and emotional qualities. And she’s continuing to showcase Ukrainian culture on the international stage.

Yadukha is an art curator of Ukraine’s annual literary and translation festival TRANSLATORIUM. Last year, one of her projects—a musical composition based on a novel by Ukrainian writer Sophia Andrukhovych—played on opening night of the event.

The novel, Amadoka, takes its name from a lake believed to have been located in what is now central-western Ukraine, Yadukha says. It was thought to be the largest lake in Europe, yet during medieval times it disappeared suddenly from maps, and now, “nobody can say for sure whether it existed.”

Like the book, the musical production is a metaphor for lost memories, and explores several of the most traumatic periods in Ukrainian history—the Stalinist repression of the Ukrainian intelligentsia, World War II, and the Revolution of Dignity and subsequent Russian invasion in 2014, which had been ongoing until the recent escalation into a full-scale war, Yadukha says. And like the novel, it considers how each of the events continues “to influence all generations of Ukrainians.”

The 2022 festival was called off, due to the war. But Yadukha and her collaborators accepted an invitation to present the project, reworked for a German audience, at translationale berlin, a literary translation festival held last month in the capital city.

“Our culture was deliberately damaged several times. The people suffered a lot and are suffering now, and all the time it is about identity, the ability to be who we are,” Yadukha says.

“It’s very important to use all the opportunities we have to speak about Ukraine, Ukrainian culture, and the arts abroad.”