The Role of the Writer in Russian Culture 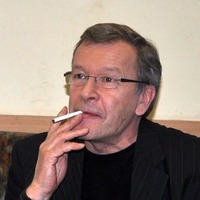 Victor Erofeyev, a giant of contemporary Russian literature, has been hailed as the heir to the long lost Russian avant-garde. The son of a high-ranking Soviet diplomat, Erofeyev rebelled agains Soviet values, and his works were banned until the Gorbachev era. His first translated novel, Russian Beauty, was published in both eht U.S. and the U.K. to great critical acclaim, and his writings in The New Yorker have won many American fans. Here, for the first time in English, is a collection of short stories written between 1978 and 1990, some of which-in particular "The Parakeet" and the title-story-hae already achieved classic status in Russia. Written during the death throes of the Soviet Union, though still relevant today, they have implications that are not restricted to Russia alone. In a nimble translation that preserves the dazzle and nuance of Erofeyev's righ language, will introduce Victor Erofeyev to a new generation of readers.

Free and open to the public
Sponsored by the Russian Department

Events are free and open to the public unless otherwise noted.