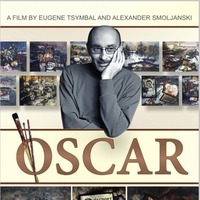 Alexander Smoljanski will talk about the film "Oscar".

Film on famous Russian artist, Oscar Rabin, who challenged the Soviet system and managed to win. He showed how powerful a weapon nonviolent resistance can be. It is a refugee success story of love and human dignity.

Alexander Smoljanski started this documentary project in 2008. After four years of extensive researching, writing, interviewing and filming he invited director Eugene Tsymbal into this project. They finished the first part of the project, the documentary In Search of a Lost Paradise (52 min) in 2015. Since then it attracted a considerable attention of international public and cinema professionals. Alexander Smoljanski co-wrote, co-directed and produced the second part of the project, the documentary Oscar (90 min, 2018).

Sponsored by the Russian Department

Free and open to the public

Events are free and open to the public unless otherwise noted.